Cookies go nicely with oat drinks. As it happens, the digital kind do too. So is it okay with you if we use cookies on this site? What’s cookies?

Are you a healthcare professional?

Hang on there, you cool person who is looking to read some extremely interesting scientific information on oats and plant-based nutrition. Before you take a look at the following pages and before you proceed to click ‘YES,’ we have a disclaimer that we would like you to read here.

No, I am a regular (but still very cool) consumer. Take me back to the consumer site FAQ.

Show me the disclaimer!

Well-designed plant-based diets are both nutritionally sufficient and perfectly appropriate for all stages of the life cycle. (1) That said, depending on the level of animal food restriction, there are a few nutrients that need specific attention, as discussed below.

Some people express concern that those who follow a plant-based diet may not consume enough protein. In reality, however, this is seldom the case in Europe. In most cases, when calorie requirements are being met, plant-based and vegan diets naturally meet or exceed recommended protein intakes.(2)

Good sources of plant protein include lentils, beans, chickpeas, seeds, nuts and nut butters (e.g. peanut butter), and tofu. Many other plant foods also contain protein, including potatoes and a wide variety of grains, from bread, pasta, and rice to oats, quinoa and breakfast cereals.

The following table shows the varying amounts of protein in different foods:

Fats are a concentrated source of energy. They provide essential fatty acids that are required for good health, and they're also important for the effective absorption of fat-soluble vitamins.

A plant-based diet often contains less saturated fat and more unsaturated fat than does a diet based more heavily on animal foods.

With this in mind, it's recommended that:

Omega-3 fatty acids have been found to be beneficial for health. They're commonly found in oily fish (docosahexaenoic acid (DHA) and eicosapentaenoic acid (EPA)). Plant sources of omega 3 fats (Alpha Linolenic Acid) include flaxseed, walnuts, hemp seeds, chia seeds and soya beans. For cooking, oils like rapeseed, hemp and flaxseed are preferable to corn or sunflower oil. Plant sources of omega-3 are converted in the body into EPA and DHA.(2).

The majority of our daily energy intake should come from carbohydrates. Carbohydrates that are natural sources of dietary fibre are valuable to human health. Examples of fibre-rich foods include wholemeal and whole grain products, fruits, vegetables, lentils, beans, pulses, seeds and oats.

Sugar is a ‘refined’ carbohydrate. Like the rest of the population, vegetarians and vegans are advised to eat fewer sugary foods like cakes, biscuits, sweets, chocolates and sweetened drinks, as they provide little nourishment and can contribute to obesity and tooth decay (2). Back to top.

Dairy foods are a good source of calcium, so if these are excluded from the diet, it's important to obtain calcium from other plant sources. Non-dairy sources of calcium include:

*The large amount of oxalic acid in certain vegetables, such as spinach, reduces the absorption of calcium.

In addition to the amount of calcium present in these plant foods, it's important to also consider the bioavailability of that calcium. This is related to oxalate content of foods and, to a lesser degree, phytate and fibre. Absorption from high-oxalate vegetables, such as spinach and Swiss chard, may be as low as 5%. As a result, these foods can't be considered good sources of calcium despite their high calcium content. Absorption from low-oxalate vegetables, such as kale, turnip greens, Chinese cabbage, and pak choi, is about 50%. Absorption from calcium-set tofu and from most fortified plant-based milk alternatives is similar to that from cow's milk, at approximately 30%. Other plant foods, such as white beans, almonds, tahini, figs, and oranges, provide moderate amounts of calcium with somewhat lower bioavailability (about 20%).

Oatly oat drinks (except organic oat drinks) contain 120mg calcium/100ml, similar to the amount in cow's milk. They're also a rich source of vitamin D, which supports normal calcium absorption and bone health, and they're fortified with iodine, riboflavin and vitamin B12 too. Oatgurt is also fortified with calcium, iodine, vitamin B12 and D.

The Eatwell Guide (4) recommends that consumers of plant-based dairy alternatives select unsweetened and calcium-fortified options. Oatly oat drinks (except the organic oat drinks) are fortified with calcium as well as iodine and vitamins B2, B12, and D.

You can read more information on iodine and vitamins B2, B12 and D.

As the proper absorption of calcium depends on adequate levels of vitamin D, vitamin D is itself essential for healthy bones and teeth. Most of our vitamin D comes from adequate exposure to sunlight, as vitamin D is formed when the sun’s ultraviolet radiation reaches the skin. Generally, substantially less vitamin D is formed by the skin during the winter months as well as in people with darker complexions and in those who cover their skin with clothes when outdoors.

It’s generally difficult to get enough vitamin D from food alone, so some countries, including the UK, now recommend that everyone take a daily supplement of 10mcg/day during the autumn and winter months. (5)

Vitamin B12 has many important functions, including the formation of red blood cells and keeping the nervous system healthy. It's only found naturally in foods from animal sources, so it's absent in vegan diets.

While it's known that vitamin B12 can be formed by certain bacteria and fermented products (lactic acid fermentation), the amounts may be both small and  uncertain. Algae are also known to contain vitamin B12, but their bioavailability is currently unclear. Vitamin B12 is also produced in the large intestine, but because vitamin B12 absorption takes place in the small intestine, this is of academic interest only. As a result, dietary supplements and fortified foods may be recommended as a reliable source of vitamin B12 (2, 4).

To get enough vitamin B12 in the diet, you can either eat fortified foods twice per day or take dietary supplements of vitamin B12 (either 10mcg daily or at least 2000mcg weekly) (6).

If you'd like, you can read more on calcium, iodine, riboflavin and vitamin D , or go back to top.

Oatly oat drinks (except the Organic) are fortified with B2, as well as with calcium, iodine, vitamin D and vitamin B12.

You're welcome to read more on calcium, iodine, vitamin D and B12, or go back to top.

It's important to note that iron in plant foods (non-haem iron) is less efficiently absorbed than iron in meat and fish (haem iron). Vitamin C is a known enhancer of iron absorption, so consuming foods rich in vitamin C along with plant foods containing iron is a good way to promote iron uptake in a plant-based diet.

Absorption is also regulated by bodily requirements, so lower body stores result in an increased absorption of non-haem iron. Additionally, dietary factors like phytic acid found in whole grains and legumes may influence non-haem iron uptake. You can read more on phytic acid here, or go back to top.

Iodine is essential for the production of thyroid hormones (like thyroxine), which are responsible for a number of body processes, including the regulation of metabolism.

Fish, shellfish and dairy are each good sources of iodine. The iodine content of cereals and grains is variable, as the exact amount depends on the amount of iodine in the soil where these foods were grown.

There is evidence that many of us in the UK may not be getting enough iodine, particularly in pregnancy and especially if avoiding certain foods (e.g. vegetarians and vegans). While most adults following a diet containing milk, dairy products and fish should be able to meet their iodine requirements, an iodine supplement can help meet iodine needs for those who don't consume enough iodine-rich foods on a regular basis.

We fortify our oat drinks with iodine. The level of iodine is 22.5µg/100 ml in all oat drinks except the organic oat drinks. Oatly oat drinks are therefore be rich in iodine - as well as calcium, riboflavin, vitamin B12 and vitamin D.

Zinc is found in many foods. Shellfish, milk, dairy products and eggs are particularly good sources. Plant food sources of zinc include:

*Like iron, the absorption of zinc in whole grains can be inhibited by phytic acid. You can read more on phytic acid here, or go back to top.

Selenium plays a critical role in certain important antioxidant enzymes, which help protect the body against oxidative damage. It's also necessary to the use of iodine in thyroid hormone production, for immune system function and for reproductive function.

Vitamin B6, also known as pyridoxine, has several important functions including its role in maintaining a healthy nervous system and in protein metabolism. It's important for people who do not eat dairy to find alternate sources of it (2).

Fortunately, vitamin B6 is found in a wide variety of foods. Plant-based sources include:

Phytic acid, also known as phytate, occurs naturally in bran (the husks or hulls of grains). Phytic acid combines with minerals like iron and zinc and reduces their absorption in the body.

Certain conditions, including long fermentation times, can help reduce levels of phytic acid, so sourdough bread and breads with long leavening times can be beneficial with regard to iron absorption.

Oat husks/hulls (or 'oat bran') contain the highest proportion of phytic acid in the oat grain. This portion of (insoluble) fibre is removed during Oatly's production process, which helps ensure that mineral absorption is not inhibited (7,8). Back to top. 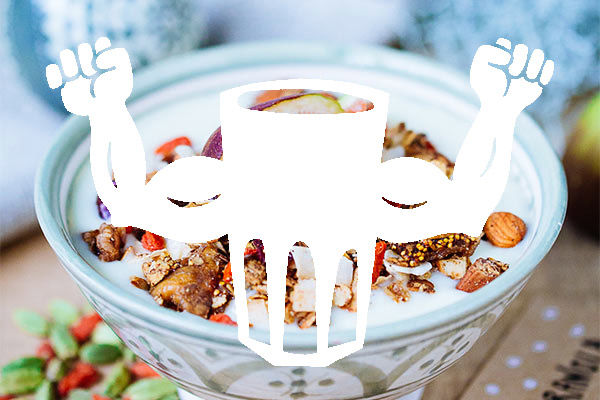 Find out more about our products and other oatastic stuff at our consumer site:

More than you would ever want to know about our products.